Apps and Articles to Guide Your Social Recruiting for 2013

Hopefully everyone is well recovered from their New Year's Eve shenanigans.

Mine were quite easy to recover from, as they involved mostly fireworks, running and pancakes (running from fireworks towards pancakes). I thought I knew what fireworks were all about until experiencing them Dutch-style. There were blasts of light exploding in the sky in every direction I looked. The Dutch spend 70 million on fireworks for New Year's Eve, and set them off from canal boats, parks and rooftops. The results are pretty darn magical.

Speaking of starting 2013 off with a bang (and, of course, a cheesy pun!) I thought I'd dedicate this Link Love to articles and apps that provide inspiration. The hardest part of any project is getting started (except maybe with projects involving jiu-jitsu, where the hardest part is having your limbs torn asunder...). So, what better way to begin the year than by finding new ways to get psyched-up about getting things done?

I've written already about my love of Google Currents as a tool for keeping up on new blog posts and articles. It lets you keep an eye on all your favorite blogs and has a snazzy magazine type layout.

Feedly is a new tool that's made my morning coffee and research sessions much more productive and enjoyable. Like Currents, it pulls content from Google reader as well as other feeds you've selected, and also presents them in magazine form. Feedly is much slicker than Currents, since it has more sharing of options and a  “tagged for later” section (super useful!), which Currents lacks. I still use Currents, as I find it to be slightly more reliable (Feedly is still rather new and has some bugs to be worked out), but I highly recommend adding Feedly to your social media arsenal — it won't disappoint.

So, now that I've gotten that off my chest, (really, I've been dying to write about that app for way to long) here's the rest of the links we're loving. Hopefully they'll get you as excited about your 2013 projects as they did us :)

What's more motivational than shiny new plans? Nothing! Bill Connerly explains why businesses should ring in the New Year with a new plan. He also lays out some super easy-to-follow tips for how to choose and implement new strategies. Awesome!

Here's some motivations for the job seekers out there — Jessica Miller-Marrell shares 7 Steps to a Kick-ass Job. This article has tons of great tips for anyone looking to improve their networking skills. Note to self: Update business cards!

Okay, I take it back, the promise of rock-star level awesomeness is even more motivational than shiny newness. Kristi Hines details the path to becoming a "Social Media Rockstar" and blows my fragile little mind.

Leave it to Lifehacker to make the simplest stick-to-your-goals post of the New Year. Follow through on your resolutions this year with these tips. I especially like the one about rewards, although I guess I probably shouldn't reward 20 minutes of running with a whole plate of nachos...

But, what's Wednesday night without nachos?!? 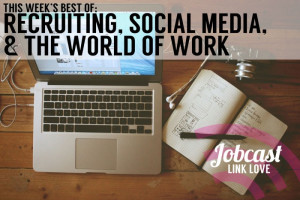 The best of HR and social recruiting in 2012

The Latest in Social Recruiting News