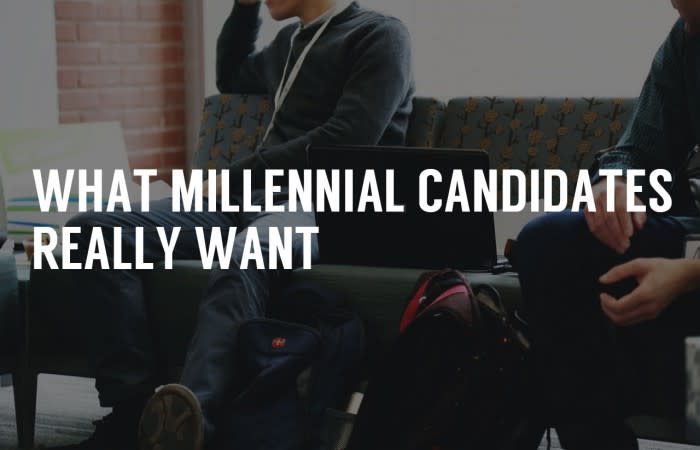 What 1,355 Millennial Candidates Want in a Job

Over the next the next decade Baby Boomers will leave the work force en mass.

62% of Fortune 100 companies believe that this will lead to a skilled labour shortage that will negatively effect their organization.

Companies need to start planning ahead and gearing their human resources department, recruitment, and retention efforts towards qualified millennial candidates if they want to avoid the negative effects of this “Baby Boomer Brain Drain.”

Gen Y’s employment patterns contrast significantly with those of the generations before them. They are more likely to job hop than Boomers and have very different expectations of their employer.

Software Advice recently conducted a survey that studied a sample drawn from the 1,355 applications that they received for sales positions in 2013.

Software Advice asked all of their candidates to answer a few longer-form questions, including: “What is most important to you in a job?”

Here's what they found: 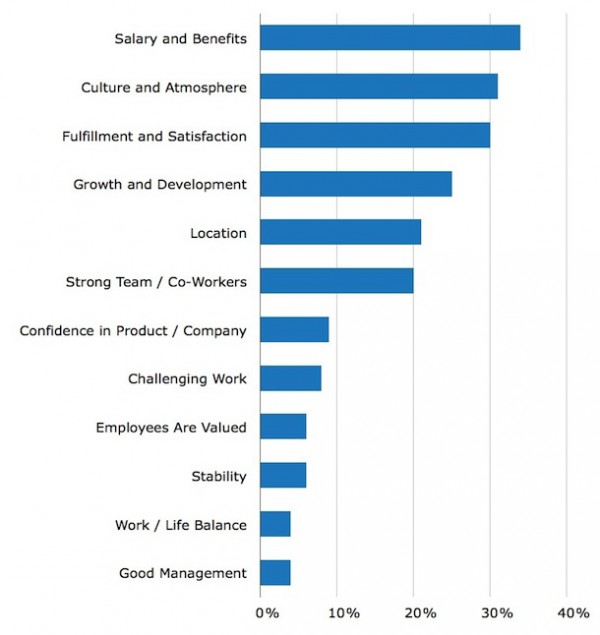 #1: Money Still Matters Most (But Not by Much)

Interestingly, several of those applicants who ranked Salary and Benefits of lesser importance noted they had previously worked in a high-paying job—and had discovered that money wasn’t everything. It seems that compensation may be of diminishing importance as Gen Y workers garner more professional experience.

“I’ve realized that a good salary is not worth it if it means sacrificing your happiness or doing something that truly interests you,” read one such response.

Similarly, the rest of the data stands in contrast to what previous generations deemed most valuable. “Stability” came in near the bottom of the list (6 percent), and even seemingly-vital qualities such as “Work/Life Balance” and “Good Management” (4 percent each) paled in comparison to the importance of, for example, “Having a Strong Team and Co-Workers” (about 20 percent).

Second to compensation, “Culture and Atmosphere” was ranked the most important aspect of a new position by our sample Gen Y applicants (31 percent mentioned this). This data suggests that for Millennials, it’s not enough just to have a well-paying job—they also need to like where they work.

Many mentioned wanting to be in a “positive,” “pleasant” or “friendly” working environment. They also cited a desire for a company culture that was “challenging,” “dynamic” and focused on achievement and recognition.

#3: Fulfillment and Satisfaction in What I Do

Thirty percent of applicants cited a need for “Fulfillment and Satisfaction in What I Do,” making it the third most important quality for our sample. Those who mentioned this characteristic noted that they wanted to enjoy the work they were doing every day, and wanted to do something they had a personal interest in.

Responses included “having a passion for what I do,” “loving my job,” being involved with “meaningful work” and doing something “rewarding.”

Mentioned by 25 percent of applicants, “Growth and Development” was the fourth most important characteristic. Part of this may be due to the fact that Gen Y applicants are, by definition, on the younger side of the age spectrum: many cited a desire for “learning” or to gain more on-the-job “experience,” and noted they wanted to “advance [their] career.”

Others sought specific opportunities for upward mobility, while some mentioned wanting to be able to set and achieve professional goals.

What Gen Y really wants is to make a good living—but these young professionals also want to find happiness, fulfillment and opportunity in their work, and to build the foundation for a career that rewards in ways beyond the mere financial.

Our data aligns with other findings about Gen Y in the workplace. A recent survey of 500,000 employees between ages 19 and 30 listed the top 10 companies for Gen Y workers. All of these companies pay their young employees very high salaries—median pay ranges from $55,800 at defense contractor SAIC to $92,800 at Microsoft—and boast ambitious yet flexible workplace cultures. But perhaps most importantly, a majority of workers at each of these companies feel that their jobs are “meaningful.”

Not only that, 72 percent of these employees say they are doing meaningful work, 87 percent have high job satisfaction and 95 percent have a flexible schedule.

Google, the survey’s second most popular company, is regarded by many as the archetypal Gen Y employer—and small wonder, considering over 40 percentof Google’s employees were born between 1982 and 1993. (Birth years for when Gen Y starts and ends range from the early 1970s through the early 2000s.)

Average salary for these Millennial workers at Google is a whopping $80,000, and the company goes above and beyond to ensure that the culture and atmosphere is friendly and accommodating, employees love their jobs and there are plenty of opportunities to grow.

So, if your company is looking to hire Millennials, make sure that you are offering positions with not only attractive pay—but also the kinds of non-monetary rewards Gen Y really wants.

For more about this survey and tons of other fantastic information about social job seekers, HRTech, and millennial candidates check out the Software Advice blog.

The Strength of Social Media 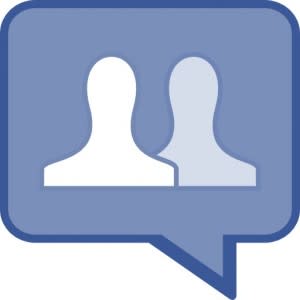